We have lost so much. Yesterday, the 20th of April 2011, was a very dark day. The world lost two very passionate, courageous and dedicated journalists; photographer Chris Hondros from Getty Images and photographer and film maker Tim Hetherington who was with Panos Pictures.

I had the honour to know both Chris and Tim a little. I had met Chris for the first time in Amsterdam when we went to the World Press Photo awards ceremony. He had won second place in the Spot News category with the most heartbreaking and powerful image of a poor girl crying after her parents were killed by the US military in Iraq when their car didn’t stop when ordered to. It was an amazing image that shook anybody who saw it, leaving most teary eyed. I also met Chris again at a World Press Photo event at the University of Southern California where we got trapped along with all the other photographers there to present their work, in an elevator which had got stuck for 25 minutes. It was very funny! I won’t pretend we were close friends and alas we never worked together but these two meetings showed me that Chris was an amazing man; truly dedicated and extremely caring. I have constantly been amazed by the strength of his powerful work. He produced some stunning images in Libya on the day he was killed. 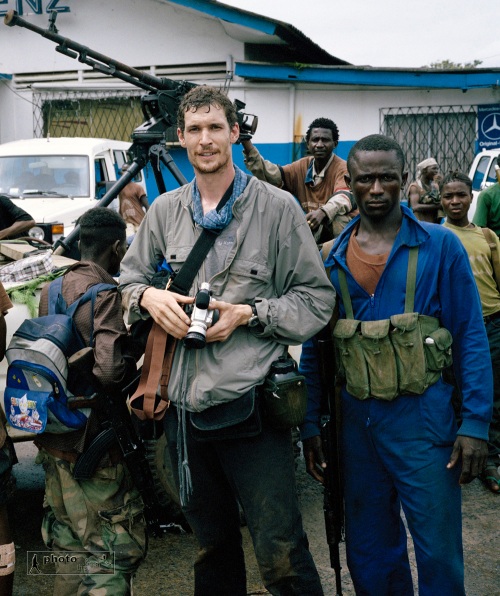 Photographer Tim A. Hetherington among rebel fighters of Liberians United for Reconciliation and Democracy (LURD) at their frontline headquarters in Tubmanberg. Photo: Tim Hetherington / Panos Pictures

Unfortunately I only met Tim once; I went to see him talk once and we had an extremely interesting conversation afterwards; it was as if we had been friends for years – in fact one of the people in teh group thought we were after listening to us. So extremely likeable, so amazingly modest and exceptionally dedicated. His talent at communicating with the still image or video goes without say. His photographs from Afghanistan, especially the World Press Winning image from 2007 just left me in awe. An image from such a dark place but so much like a poem.

When I read this terrible news from our photographers’ page on Facebook I froze. It said Tim had passed away and Chris was possibly deceased too. I have no shame in admitting that this horrific news left me crying and tearful. When it became clear that Chris had also succumbed to his terrible head wound, it was just devastating.

It’s always hard loosing colleagues. It’s hard enough finding out that a colleague has been hurt. To find out that two dear people that you know, admire and respect have been killed is just……….

Our entire community of photographers is shaken to it’s core. A candle was lit in memory at St Bride’s Church in Fleet Street. Our forums and Tweets are filled with messages of sadness, grief…..such a sour feeling. Tears, silence, disbelief.

I had recorder Restrepo when it was first shown on the National Geographic channel. For various reasons I had just never found the time to see it. Last night, teary eyed and shaken, I found the time Tim. It was so nice to hear your gentle voice as you spoke to the soldiers. I wish I could say this to you face to face; it was a magnificent film; bravo.

A day before it all ended for Tim, he made his last Tweet: “In besieged Libyan city of Misrata. Indiscriminate shelling by Qaddafi forces. No sign of NATO.”

All I wish is that neither of you amazing gentlemen suffered yesterday. I hope you didn’t feel a thing. My thoughts are with you, your families and you friends. You shone as human beings. I hope you rest in peace.

Diary (2010) from Tim Hetherington on Vimeo.

‘Diary’ is a highly personal and experimental film that expresses the subjective experience of my work, and was made as an attempt to locate myself after ten years of reporting. It’s a kaleidoscope of images that link our western reality to the seemingly distant worlds we see in the media.

Like Loading...
This entry was posted in News, Photography, viewpoint and tagged dedication, honour, obituary. Bookmark the permalink.