Observer picture editor Greg Whitmore, who is leaving the newspaper, looks back at the photos that made the news during his quarter century at the helm of the picture desk.

Absolutely honoured to have my work featured in this gallery of images, spanning 25 years of our modern history. The honour is even more amplified when I look at the phenomenally powerful work from talented and devoted colleagues with whom I’m sharing the page, but also by the fact that the gallery was curated by such an extremely well respected and talented picture editor with true Fleet Street heritage.

You can see the gallery here and also read about the legendary Greg Whitmore’s experiences at The Observer here, covering his near 30 years at the paper.

You can read more about London’s darkest hour in recent history and my experiences on that day, here. The same photograph from this awful day was called one of the world’s most iconic photographs by the Daily Mirror.

10 Years On From The Terrorist Attacks On London 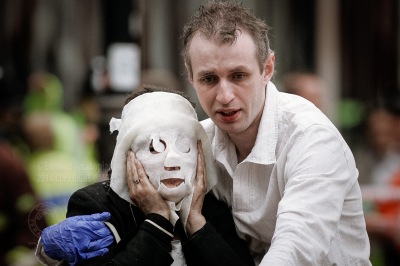 Paul Dadge leads Davinia Turrell (now Davinia Douglass) away from Edgware Road tube station after a suicide bomb attack in which she suffered burn injuries, resulting in the need for a face mask. The bomber blew himself up on a train at the station, killing seven passengers – one of four coordinated attacks on London’s public transport system during the morning rush hour. The bombs exploded within 50 seconds of each other on London Underground trains, and the fourth bomb occurred on a bus less than an hour later. The explosions resulted in 56 deaths (including those of the four bombers) and 700 injuries. Surveillance video footage showed that the four men had been working together. Intelligence services have claimed links between the bombers and al-Qaeda. Edgware Road underground station, London, United Kingdom. July 07, 2005. Photo: ©Edmond Terakopian

It’s with a heavy heart that I look back to the events of 10 years ago. 7/7, the day my home town was attacked by four suicide bombers who killed innocent people who were just trying to commute using the tube trains and a bus.

I thought it appropriate to republish a slightly updated version of the article I wrote for the Digital Journalist at the time of the attacks:

July 7, 2005. I was looking forward to today. Yesterday had ended on a high. London had been nominated as the Olympic City for 2012. I had two excellent assignments today; the first was an 8.30am photocall at the Natural History Museum to photograph a new diamond exhibition. The second was an exclusive look at how the Police were monitoring the security for the G8 summit from their secret control centre.

There must have been around 20 photographers waiting to photograph the diamonds. We were queuing to photograph the world’s largest uncut diamond. I was waiting patiently, macro lens and lights in hand, for my turn. As I contemplated getting a coffee, my phone rang; it was the PA office, for whom I was working today. “There’s been an explosion at Aldgate East tube station….get there. They’re saying it’s a power surge”. I caught every one’s attention as I started to pack away my gear, as a few colleagues were waiting to borrow my macro lens! Slowly, the others began to get calls.

As I rushed outside, a friend from AP asked for a lift as we were both going to Aldgate. We got in my car and started making our way as quickly as traffic allowed. The phone rang again, “There’s been a second explosion at Edgware Road tube. Go there instead as you’re closer”. My heart sank. This was no longer an accident as originally thought. How can there be two explosions on the tube in the same morning. I knew it must be terrorism. I began to think of 9/11. The first plane could have been an accident, but as the second plane hit…..

We were very lucky. The traffic was a lot better than usual and we got to Edgware Road quickly. As we got to the scene, we were greeted by a lot of silence. The emergency services were all busy. No screaming of orders, nor the sound of sirens. I must commend them on their professionalism. Unfortunately, the Police had erected their cordons, and there was no way to get close to the tube station. I did a quick walk around the roads, and decided which would be the best. Luckily I had picked the correct road. Within ten minutes, the first passengers walked out and down the road, closely followed by the walking wounded. The first sight that drew me was a lady being helped by a young man (Paul Dadge as I found out the following day). Her face was burnt and she had a white face mask on. She was barefoot, and had blood on her legs. I felt bad for her suffering. I had an instance of battling with the shock of witnessing what clearly illustrated something terrible had happened beneath us. Reminding myself of my duty as a photojournalist, my camera was raised. For the next five minutes, all I saw was through the viewfinder. Concentrating on the images which were presenting themselves.

Paul Dadge leads Davinia Turrell (now Davinia Douglass) away from Edgware Road tube station after a suicide bomb attack in which she suffered burn injuries, resulting in the need for a face mask. The bomber blew himself up on a train at the station, killing seven passengers. Edgware Road underground station, London, United Kingdom. July 07, 2005. Photo: Edmond Terakopian

It was a very intense five minutes. So many injured. The thing that struck me the most though, was I only saw one person crying. Everyone else was composed; there was no screaming, no running. Everyone, including the lady with the burnt face, and even the crying lady, were very dignified. I saw a gentleman, bandaged on his neck and head, blood on his face and shirt, still carrying his newspaper (now covered in blood) as if nothing out of the ordinary had happened. It was amazing. This was the British spirit; the stiff upper lip talked of by Sir Winston Churchill.

The wounded were taken to the Hilton Metropole Hotel. I decided to go inside and managed to stay for several minutes, taking pictures of the wounded waiting for treatment. It must have been the world’s poshest triage area. The hotel’s security soon noticed me, and I was asked to leave.

After another ten minutes or so, it was obvious all the pictures had been taken and I made my way to the nearest Starbucks to wire on their WiFi. Although all the mobile networks (cellphones) were down, WiFi was still working…thankfully. After wiring I returned to the scene. As nothing was going on, I contacted the office. They asked me to check out Kings Cross station. By now, we knew that there were at least four explosions; three on the tube, and one on a bus. 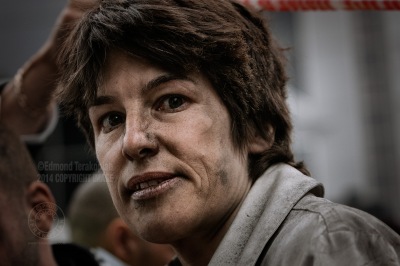 As I made my way, a friend contacted me saying that he had heard of someone who had been evacuated from Leicester Square tube, following another explosion. This was minutes ago. I called the office to let them know, and I made my way. The streets were clear. No cars, no buses, no people. Just silent emptiness.

I got there to find that there was no explosion; just that the station, along with all others in London were closed. I found out later that it was a controlled explosion by the Army on a suspect package.

I got to Kings Cross. Police cordons were well and truly up. There was no access. The explosions were below ground and there was nothing to photograph. Knowing how long this day was going to be, I grabbed a sandwich and a coffee.

I was then sent to Tavistock Square, where the bus had been bombed. I had high hopes of getting an image as this was in plain sight. As I got there and saw the hoards of frustrated media, I knew this wasn’t to be easy. Again, the Police with their cordon tape had been out and had covered everything within sight with blue and white tape. I attempted to get into a high rise hotel, only to be greeted rather rudely by two security men. I was rather chuffed as another four joined them. Obviously they thought two goons weren’t enough!

After another hour or so, I had to admit defeat; there was no way I could find an angle. I called the office and was told not to worry, as one of our photographers had managed to get a good shot. “Can you get to Downing Street for Blair in 20 minutes?”. I said that it was impossible! I was sent anyway!

It was for a picture of the PM arriving at number 10. I had missed it. I got another call, “Can you go to Buckingham Palace, the flag’s at half mast”. Back in the car, and off I went. This was the last image I took today. A very sad and symbolic way to end London’s darkest day. My city had been targeted by terrorists. 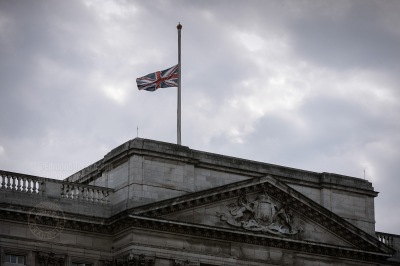 Terrorist suicide bombing of London. The Union Flag flies at half mast at Buckingham Palace follwing the request by the Queen in memory of the victims who lost their lives in the morning’s terrorist attacks. July 07, 2005. Photo: Edmond Terakopian

*I have since left PA. For syndication of this work please contact Eyevine or Polaris Images.