A short clip showing a quick comparison between a Canon C300 and Canon 5D MkII. The cameras were set up as identically as possible, using the same settings. Please note that this was shot during an open day event, so not ideal conditions as the settings were constantly being changed on both cameras by attendees to the event! Lastly, there’s a clip from the C300 which is ungraded. Many have asked to see footage which hasn’t been touched, so all of these clips are straight from camera.

Putting aside for a moment that the Canon C300 is actually a proper video camera with all the video functions, flip screen and audio abilities, not to mention the form factor, that one needs for professional video (all of which are lacking on the 5D MkII) and looking at purely the image quality, at first glance, there appears to be little difference between the two.

It’s only when we brought the image into the full editing suite that the huge dynamic range and masses of detail in the extreme highlight and shadow areas started to show the C300 as vastly superior. Even on the non flat settings, the file was just lush with detail. Although I love the 5D MkII, the C300 is just on a completely different level.

The 5D MkII does have an edge in two ways; it has that gorgeous full frame sensor as opposed to the Super 35mm of the C300 (crop factor of x1.6) and is many, many times cheaper, even when taking into account finders / EVFs, rigs and external audio that’s needed to make it usable.

The C300 does have it all though. I for one am extremely impressed by this camera; it really is rather good. 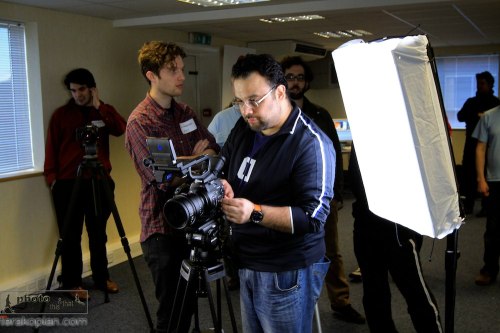 You can see my longer, graded, demo reel from the Canon C300 below:

Hands On With The Canon C300


I recently had the pleasure of shooting some video on the new Canon C300 during the C300 event at New Day Pictures. The aim being to show off the camera’s abilities to the guests by supplying footage for editor and colourist Neil Patience to showcase during the day. Our model for the day was the extremely talented and wonderful Vicki Blatchley.

For this video I used the C300 PL, which as it’s name suggests, has the PL mount. During the shoot I used the RED 50mm and 85mm PL lenses. Lighting was by two LED panels with the main light coming from a Kino Flo Diva-Lite. I also had the pleasure of trying out a Miller tripod for the first time and must say, I was rather impressed. All equipment was supplied by New Day Pictures (whom I highly recommend for any video, lighting and accessory rentals).

An ungraded, straight from the C300 stills capture, using Quicktime. The colourspace on the camera was set to EOS for this clip. Image: Edmond Terakopian

Firstly, I need to clarify that the C300 was a pre-production model; having said this, it performed flawlessly. Having never seen, let alone used this camera, after a few minutes of training by Canon’s staff at the event I was ready to shoot. It’s an amazingly simple camera to get to grips with with a clear menu system and extremely clearly market keys dotted around the camera; I found it ergonomically brilliant. A very comfortable camera to hold and use. I was also surprised that it was lighter than I anticipated. For any prolonged handheld use though, I would probably suggest a shoulder rig. All the shots in their short film where done on the Miller tripod. My only disappointment was the microphone holder needed a spacer and so I couldn’t use my trusty Rode NTG3 to test out the camera’s audio abilities. 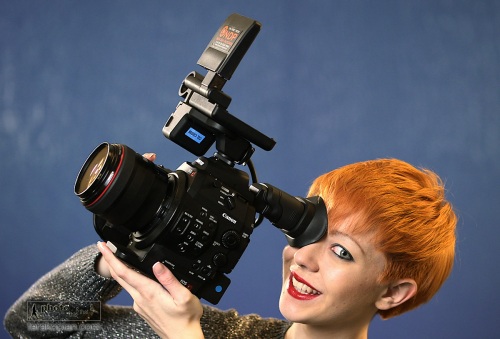 Vick Blatchley with the EF mount version of the Canon C300. This image is a screengrab from a Canon C300 video file. Photo: Edmond Terakopian

After the first shoot, I was impressed by the camera but was extremely keen to see what the footage looked like on the editing station. Once the files were transcoded from MXF files to Pro Res 422 (using the free Canon XF FCP plugin) we looked at them in FCP 7. Straight out the camera the files were amazingly lush. Full of detail, vivid with accurate colours and pin sharp. The most astonishing aspect was the dynamic range; the camera has it’s widest range at 850 ISO. Not only was this apparent in all the extreme highlight and shadow detail, but equally apparent was just how clean the files looked. This camera is the available light shooters’ dream. Along with it’s built in optical ND filters, shooting to achieve maximum dynamic range in outdoor situations is going to be a walk in the park. In use, the fold out LCD monitor was an absolute joy to use. For handheld use, the built in viewfinder makes things more comfortable, taking on the form factor of a DSLR and providing another point of contact to steady the shot. 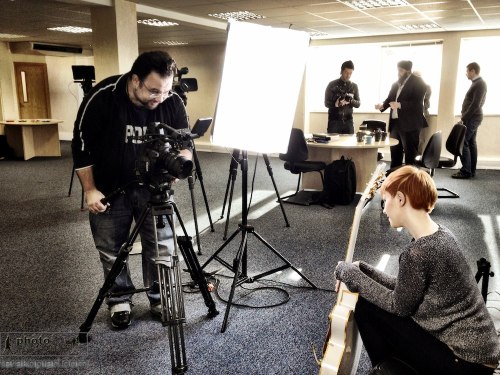 For my edit here, I used FCP 7 and the Canon XF plugin to transcode the files and imported them into FCP X for my edit. Initial grading was done in FCP X and finished off using Magic Bullet Mojo. This workflow is a bit annoying (and is the first time I have used FCP7 since upgrading to FCP X) but I’m guessing it’s only a matter of time until there’s full compatibility).

My half day with the camera was an absolute joy. My nervousness at perhaps jumping in at the deep end having to produce footage on a brand new camera were unfounded. I took to it like it was a familiar piece of kit. Judging by how well it performed (running for around six hours solid) and how amazing the footage looks, I wouldn’t hesitate in recommending the C300. The only snag is the £10,000+VAT asking price. If I find my video work increasing as it has done over the last few years, I won’t hesitate in getting one of these, but until then, alas it will remain out of reach. So far, it is the most capable video camera I have worked on, and that includes the RED One and my beloved Canon 5D MkII. In fact, why not rent one from the folks at New Day Pictures and see what the fuss is about!