Opera By The River

Thrilled to announce my forthcoming solo exhibition which will be on from September 30th to October 11th, 2015. It’s an outdoor exhibition on London’s South Bank, very close to the National Theatre (it’s actually just behind the IBM building) on the Riverside Walkway. There’s no entrance fee and is free for all. Do kindly spread the word! 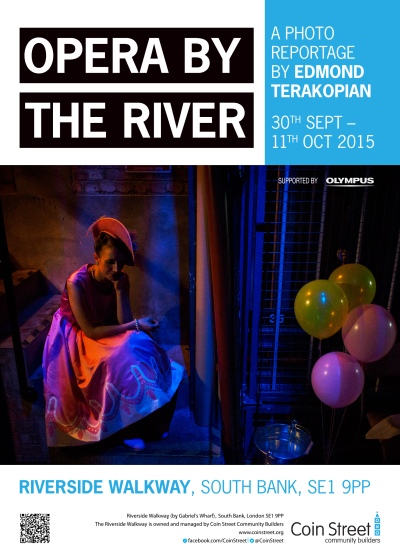 This personal project is the culmination of seven months of photography with the Opera School at the Royal College of Music in London. With the kind support of Olympus I’m overjoyed to be able to share this work with you as an exhibition.

The exhibition itself is designed by the fabulous Stuart Smith.

It’s been a try joy to spend this time with the amazingly talented students at the RCM and the superb staff who have been more than helpful in making the reportage a reality.

BBC coverage of Opera By The River

Opera by the River is an outdoor photographic installation, exhibiting the work of Edmond Terakopian. Terakopian spent over 7 months working with and photographing the Royal College of Music (RCM), documenting the entire process of staging an opera from the initial auditions through to the final stage take down.

From January 2015 Terakopian worked closely with the RCM and they gave him unique access to their preparations for the production of the opera ‘Albert Herring’. The photo essay captured intimate and revealing images of the opera singers, members of the orchestra and production team as they developed and finally staged the historic opera by Benjamin Britten, a former pupil of the RCM himself.

The photo essay has been edited to 62 images, giving a glimpse into the one of the world’s great conservatoires, The Royal College of Music. The photographs will be displayed at an outdoor exhibition entitled ‘Opera by the River’, on the SouthBank London.

The exhibition is free for the public to view, 24 hours a day.

The exhibition is being staged at RiverSide West on the SouthBank. Overlooking the River Thames it is a 4 minute stroll from the National Theatre and is situated behind the IBM building. It will open from Wednesday 30th September to Sunday 11th October.

The Terakopian Royal College of Music photo essay project was supported by Olympus, and shot primarily on an OM-D E-M5 Mark ll, the remainder on an OM-D E-M1.

2 responses to “Opera By The River”