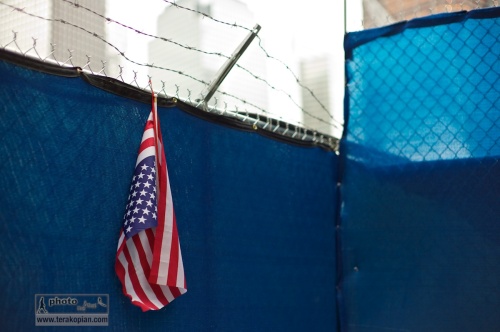 As the tenth anniversary of the inhumanity carried out at the World Trade Centre approaches, construction workers work to finish building the various skyscrapers, including One World Trade Centre (also known as the Freedom Tower). Alongside these huge new buildings are two pools with waterfalls, placed within the footprints of the original Twin Towers. This and the memorial museum will make up the memorial plaza.

This was a return visit the area; what once used the be literally awesome, where one could not see the tops of the towers from ground level and where taxi cabs were the size of ants when viewed from the roof, had now become the sad and depressing site of ground zero. The site of such inhumanity and sorrow.