Installing an SSD into a MacBook Pro

Following on from my previous post on installing an SSD into my Mac Pro by utilising the optical bay (allowing a total of six drives to be installed in all) I decided to do a similar thing to my Apple MacBook Pro.

With cloud computing (storage of data, transferring data with services such as Drop Box and buying of software) and USB keys, we have become less reliant on optical drives (CDs or DVDs). It makes absolute sense to utilise this space by fitting a second hard drive. Other World Computing, or OWC, have a genius adapter called a Data Doubler which has the form factor of a laptop internal optical drive and is a bracket for holding a 2.5″ hard drive or SSD.

Installing an OWC Mercury Electra 6G SSD into an Apple MacBook Pro (15″, Mid 2010 model). With the cover off; the DVD drive where the SSD will be installed is on the bottom left. The OWC “Data Doubler” bracket, SSD and the tools needed for the job. August 22, 2011. Photo: Edmond Terakopian

Having found a European dealer, Macupgrade (superb service), I decided to order the parts needed for this project (You can also order direct from OWC):

Rather handily, the Data Doubler comes with a full toolkit as well as extremely comprehensive instructions on how to fit it, covering a very large range of Mac laptops. What I found even more useful were the excellent instructional videos on the OWC site.

Installing an OWC Mercury Electra 6G SSD into an Apple MacBook Pro (15″, Mid 2010 model). With the cover off; with the DVD drive removed. This is where the SSD will be installed. The OWC “Data Doubler” bracket, SSD and the tools needed for the job. August 22, 2011. Photo: Edmond Terakopian

All in all, it took around thirty minutes to take out the DVD Superdrive, install the SSD and finally install the optical drive into the external USB case (which is also powered by the USB port, so no need for AC adapters). Whilst not complicated, it pays to take things slowly and follow the instructions to the letter as one is dealing with sensitive equipment with fragile wiring and circuitary. 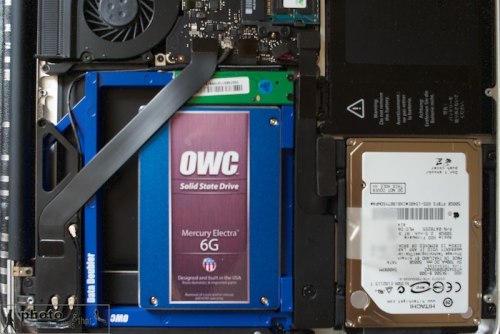 What’s fantastic about this upgrade is having two separate hard drives inside a laptop. The SSD now contains OS X Lion and all my programs. It also contains my Aperture Library and images are downloaded onto the SSD for extremely speedy editing. Once I’ve done my edits, these are then exported as Projects to the conventional 500Gb internal hard drive. Also as I approach getting the SSD full, images in the Aperture Library, after backups, can either be deleted or stored on the conventional hard drive as Referenced Files and thus, still appear in the Aperture Library.

I’m extremely impressed with this upgrade; it has brought even more usability to my MacBook Pro and made it blisteringly fast too. Previously my boot up time (from cold) was 37 seconds; with the SSD, it’s now 12 seconds! Programs open in a flash too. I for one am hooked on this latest generation of SSDs with Sandforce controllers. Completely recommend the SSD path to anyone for whom time is precious!

Great news; the fabulous folks at Macupgrade have offered all readers a kind 10% discount on all items in their shop. Discount code: macupgradephoto

IMPORTANT NOTE: Depending on your model of MacBook Pro, installing the SSD in the optical bay as shown will not harness the drive’s full speed. Certain MacBook Pro models have a faster SATA speed channel for the hard drive bay than the optical bay. It’s worth researching your model of computer to ensure you gain the maximum speed benefit. For my particular laptop, the speed is identical on both SATA channels. 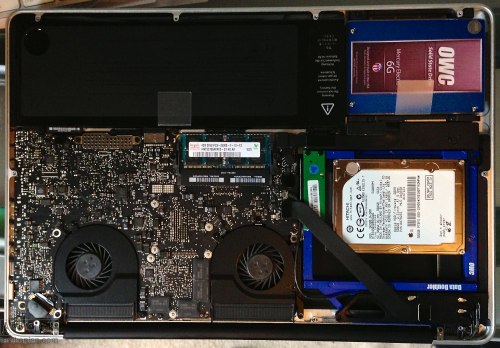 The regular Hard Drive is in the optical bay and the OWC SSD is in the HD Bay.

29 responses to “Installing an SSD into a MacBook Pro”