Photographer and film maker Edmond Terakopian filming at the Royal National Orthopaedic Hospital in Stanmore, using a Canon 5D MkII on a Zacuto Striker with the new Rode VideoMic Pro (with a windshield fitted). In the foreground is the original Rode VideoMic. Filming in an operating theatre. May 16, 2011. Photo: Neil patience

When I reviewed Canon’s 5D MkII in 2009, I concluded that the easiest way to get good audio on the camera was to use Rode’s VideoMic. I’ve been personally using this microphone since and have been getting pretty good results. However in situations where I need to travel compact or when shooting in news type situations, I did wish the VideoMic was smaller.

Rode seems to have been listening and recently launched the much smaller VideoMic Pro. It’s 10cm shorter in length than the VideoMic, 2.2cm lower in height but 0.7cm wider. It’s also lighter with the new model being 85g compared to the VideoMic’s 176g. It is just the right size now and when mounted, it doesn’t stick out the back.

I did a set of extensive listening tests comparing the VideoMic and VideoMic Pro, using a Canon 5D MkII with it’s audio gain set on automatic. The subject was in an enclosed area and recorded from a distance of 2 meters as well as one meter. I listened to the results playing back the video on a MacPro using Aperture 3. Initially I used a pair of speakers and then headphones. No matter how hard I tried to find differences between the two, I couldn’t. The larger VideoMic was already a superb microphone, and the VideoMic Pro, although much smaller, was as directional in it’s sound gathering and just as clear in picking up all the detail in the voice. If anything, the VideoMic Pro seemed to make a little less background hiss in the quite times, as the camera turned up the gain automatically.

As a result, it later came as no surprise when comparing the specifications of the two microphones to see that Rode have somehow managed to make them identical, even though the VideoMic Pro is so much smaller. 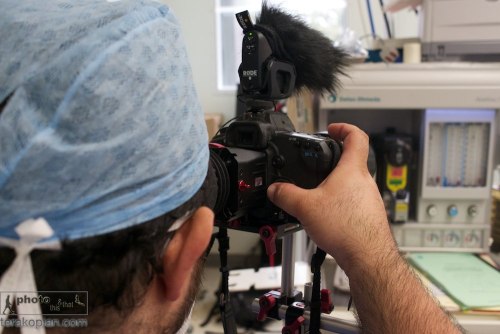 Photographer and film maker Edmond Terakopian filming at the Royal National Orthopaedic Hospital in Stanmore, with the Rode VideoMic Pro. Filming in an operating theatre. May 16, 2011. Photo: Neil patience

The new microphone is a completely different design, with a completely new suspension rig, which ensures camera noise doesn’t vibrate up to and get recoded by the microphone. I’m extremely glad to see that the on switch and all the filter controls are still at the back of the camera, where they are easily seen. There’s nothing worse that making a video recording and not switching on the microphone; with the Rode, an LED clearly shows when it’s on. The Sennheiser has these controls on it’s side where they are easily missed.

The smaller size naturally has it’s conveniences; it’s much harder to snag the microphone and naturally it takes up less room when packed. The shorter size also means that it’s now much easier to use ultra wide angle lenses.

If absolute quality is needed in audio, then currently with the video DSLRs on offer, one’s only answer is to record the audio separately and then sync it up afterwards when editing. I personally use a Zoom H4n audio recorder and Rode’s excellent NTG-3 microphone. However, this is extra equipment and expense, and demands a lot of extra time and expertise when editing. Even when doing dual audio, I still use the VideoMic Pro on a second body when shooting dual cameras (which I often do); this allows for a sound backup but also for a much cleaner audio track to synchronise externally recorded audio with. For the simpler and straight to camera audio recording, Rode’s VideoMic Pro has kept the superb sound of it’s older brother and packed it into a much smaller package. I highly recommend this to anyone wanting to use their DSLRs for video.