As regular readers will know, I’ve been using Apple’s Aperture for a couple of years now. I was so impressed by it I even switched computer platforms as a result. With its speed, ease and
flexibility of workflow, accuracy, robustness and plug-in architecture, I use it quite happily on deadline and shoot everything in RAW. Its such a capable program that I find I need Photoshop for perhaps three percent of my work.
I did however keep all my images from the PC days on a PC server on 6Tb of drives set in RAID 1 (Mirror) and would access these files on my Mac using Expression Media. I would search for them in catalogues (split up by year, as the software has a limit of how many images you can have in a catalogue, rather annoyingly!), then find it in the finder and copy it to a local folder and then import it into Aperture to work on; very long winded workflow, but it worked.
I had a bit of a brain wave a few days ago; why not import all these images into Aperture on my Mac Pro? One aspect of Aperture is that its a very powerful DAM (Digital Asset Management) for images. 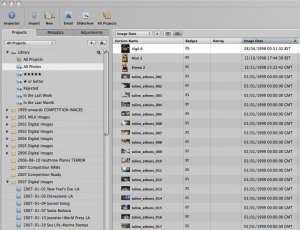 I decided to give it a try. My 3Tb of images resided on my HP server, so I set up dated folders within the Aperture library for each year. Then I imported files and folders into the relevant dated folders. The beautiful part however was being able to keep the originals on the RAIDs on the server (which you can choose on the import files and folders dialogue – also make sure you keep file names as they were originally named). What this means is that I have access to all my images, can perform full IPTC searches, apply any and all adjustments and then export the image into whatever format and size needed.
As this importing was over ethernet, naturally it took a while. I did a year at a time and after around four nights, all images were in Aperture.
At the moment my Aperture library has 342,953 images to which I have total and full access.
A tip to anyone who has a similar set up; once you have imported the images in chunks (in my case, by year), keep the server logged on as in the background Aperture will create:
i) thumbnails for all the images, and
ii) previews as well.
Once this has been done (which took another day or so – to check its status, go to Window and then Activity), you can switch off the server and still have access to searching and previewing images. If you find something that you need, then you can switch on the server and access the original image and carry on working with it. You can also use this method on external drives, be they a PC format or a Mac format.
Absolute genius (Aperture, not me!).
Addendum – Although the building of thumbnails takes a day or so, the building of previews has taken a couple of days more for my library; there are around 130,000 still left to do. However, this all happens in the background so you can still use Aperture (the program automatically pauses the preview building if it sees that you’re working on something else – also, if you need to shut down the program, it’ll pick up where it left off). Its important to let the program do all this as it will allow you to see images properly when your server or external hard drives are off-line. Also, its worth pointing out that if you’re going to do this for external drives, the procedure will be much faster than doing it over ethernet (which is what I’m doing).
I have to add that I’ve been doing this for a fair few days of solid importing and thumbnail and preview building, whilst also working on Aperture; I’ve even done some video work and the Mac Pro and Aperture have been solid as a rock – that’s what you call well engineered!