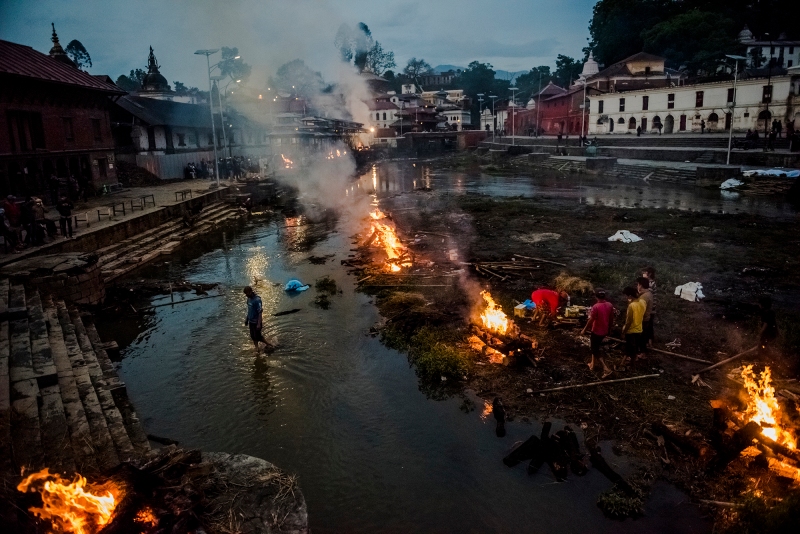 8—Kathmandu, Nepal, Tuesday, April 28, 2015:
Flames rise from burning funeral pyres during the cremation of earthquake victims, at the Pashupatinath temple on the banks of Bagmati river on April 28, 2015 in Kathmandu, Nepal. On the 25th of April, just before noon local time, as farmers were out in fields and people at home or work, a devastating earthquake struck Nepal, killing over 8,000 people and injuring more than 21,000 according to the United Nations Office for the Coordination of Humanitarian Affairs. Homes, buildings and temples in Kathmandu were destroyed in the 7.8 magnitude quake, which left over 2.8 million people homeless, but it was the mountainous districts away from the capital that were the hardest hit. Villagers pulled the bodies of their loved ones from the rubble by hand and the wails of grieving families echoed through the mountains, as mothers were left to bury their own children. Over the following weeks and months, villagers picked through ruins desperate to recover whatever personal possessions they could find and salvage any building materials that could be reused. Despite relief teams arriving from all over the world in the days after the quake hit, thousands of residents living in remote hillside villages were left to fend for themselves, as rescuers struggled to reach all those affected. Multiple aftershocks, widespread damage and fear kept tourists away from the country known for its searing Himalayan peaks, damaging a vital climbing and trekking industry and compounding the recovery effort in the face of a disaster from which the people of Nepal continue to battle to recover.